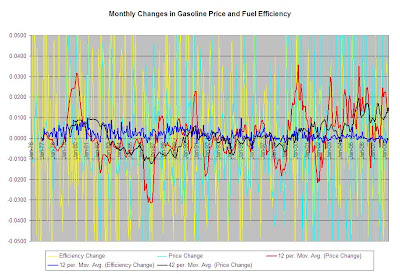 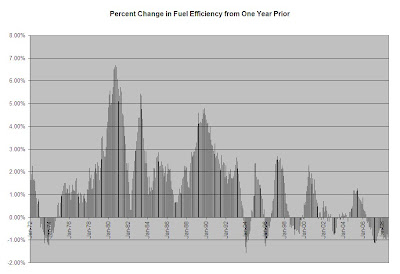 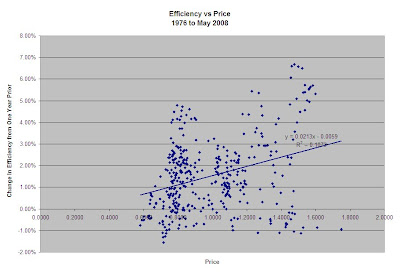 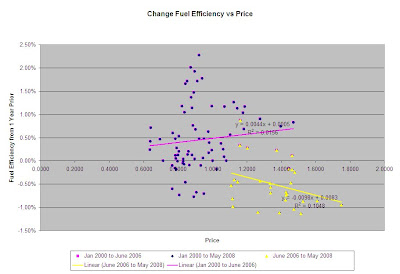 Analysis is done with gasoline data only for simplification. Diesel fuel is widely used for purposes other than transportation.

Gasoline consumption data and price is from EIA. Monthly product supplied for Finished Motor Gasoline from the EIA. (I forgot what CPI I used to adjust Prices.)

Analysis:In the late 90s, the positive correlation of fuel efficiency and price pretty much breaks down. This is probably due to ocassionally bumping into the efficient capacity of roads and large scale use of electronic controlled fuel injection and and improvements in transmission (e.g. continuously variable transmission CVT). In addition to improving efficiency, the use of electronic controlled fuel injection and transmission improvements have decoupled the relationship of slow acceleration and fuel efficiency.

In the second half of this decade, the relationship of gasoline price and fuel efficiency becomes negative. This is likely due to oversimplified belief of “slow” being more fuel efficient. Slower speeds being more fuel efficient is limited to highway driving. Aerodynamic drag does not surpass the increased efficiency of higher operating speeds until about 55mph for typical vehicles (made before 1999). In addition, electronic controlled fuel injection and improved transmissions can mean that faster acceleration is often more efficient than slower acceleration. People often confuse the idea that slower highway speeds are more efficient with the idea that slower acceleration is, it often is not.

This is all despite less driving and large declines in truck sales.
# posted by aaron @ 11:00 AM

I'm interested in the "fuel efficiency vs speed" theme. Have you ever seen any graphs that plot the two together for different models of cars?

Interesting, but causation is questionable here. What about vehicle fleet analysis? If people are trending towards entry level SUVs versus economy cars, these numbers change. Just to be a devil's advocate, what about the possibility that high gas prices which caused SUV prices to plummet (especially used ones) may have increased their makeup on the fleet, to have a net efficiency decrease for the entire fleet.

Even if that doesn't make sense (I put 1 minute into the idea), I think this analysis would be most convincing if you provided information on details of fleet makeup over time.

Truck sales are definitely down. But your are right about the fleet make up. I don't know if I will get around to finding out about fleet make up though. Jim Hamilton has done a few posts on vehicle sales. This one shows monthly car and light truck sales.

It looks like you may be right the make up. The ratio of domestically produced truck:car entering the fleet is down, but domestic trucks were selling more than domestic cars in previous years. However, this doesn't include foreign vehicle sales which are probably mostly cars. Domestic truck sales are down sharply, but they still look to be selling at about the same rate as domestic cars.

Possibly the most amazing blog that I read all year wedding dresses with sleeves!?!