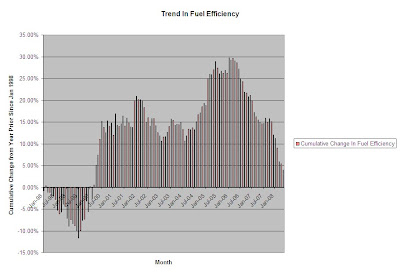 Fuel Efficiency is higher now than back in 1998. Efficiency Declined from 1998 unitl the end of 1999 and then improved quickly. It remained relatively flat until 2004 and then began improving until the middle of 2006. Since 2006 fuel efficiency has been in steep decline.

(Data is from EIA and DOT. The graph is of % change from one year prior in vehicle miles driven minus gasoline consumption % change summed for each month since Jan 1998) 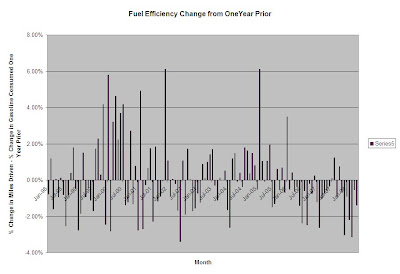 Comments:
aaron claimed, "Since 2006 fuel efficiency has been in steep decline."

That's not what the graph shows, aaron. Fuel efficiency rose in every reporting period indicated by the graph since 2006. (Notice that those bars all ascend above the zero line.)

Yeah, the rate at which fuel efficiency is increasing has declined but fuel efficiency itself is still improving. As demographic statistician Ben Wattenberg has often said, a decrease in the rate of increase is still an increase.

That's fuel efficiency relative to 1998. We are still more efficient than 1998, but were more so two years ago.

This is the sum of change for all months, not the change for each month. That fluctuates more.

I added it so you can see.