This is pretty funny...

The other day IT was in here to hook the nextdoor trailer up to our network. They needed to move my desk to get at the box, and when they did it collapsed. It just couldn't be put together again (it was warped).

Good. I hated my desk.

For one, I hate the height of desks. They are always too high.

I made my own desk out of stuff we had around and parts of the old desk. It was much better, the right height and the side of the old desk was just the right size for the top. However, because it wasn't fixed, my supervisor made me get ride of it (safety hazard). So now I'm using a printer stand from the office nextdoor and the drawer unit from my old desk (nice that I didn't have to move my things around).

Unfortunately it is the same height as a desk. Having experienced the comfort of an appropriately tall desk, I went to the carpentry shop yard and took a small platform to elevate my chair. Problem solved.

The only existing problem is that the printerstand is a couple inches smaller than the desk-side, which was perfect--just the right amount of workspace and small enough to keep the area open. It's a bit inconvient for shuffling papers. Oh well, can't win 'em all. But still, I like the smaller top better than the full size desktop, which for some reason, was no better for shuffling papers.

I got rid of my chair a while ago. Again (why does office funiture suck so much?), poor height, took up too much space, and I hate arm rests. I saw an article on people using exercise balls for desk chair so I gave it a try. It's much more comfortable and there are no restrictive, mispositioned armrests! And only $15 a pop (ha). The only inconvenience is having to reposition it everytime I sit down.[update : I bought a carpet remnant, so no more rolling away.]

Here's a pic (yeah, I just discovered I can upload pics today): 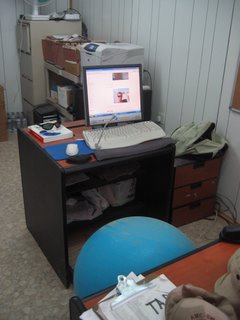 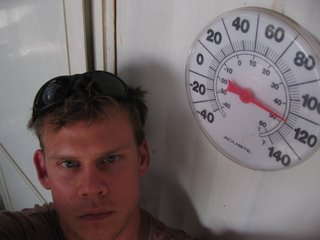 This is in the shade.

Here's one in the sun: 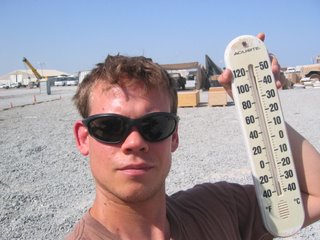 I bought a new toy. I ordered an apple 15" PowerBook Pro. It also came with 30GB iPod for an additional $90. Also, for another $90.00, I upgraded to the faster hard drive. I can't wait to get it, unfortunately it might be several weeks.

Buying it online was a pain in the ass. They may have a good product, but company runs like big government. After I picked everything I wanted out and went to purchase it, I found out that they do not deliver to APO addresses. The website said to go through AAFES. I went to a AAFES, they didn't have anything in store. The catalog said to use the AAFES website. The website was incredibly slow and of course there were no apple computers. Finally I ordered the computer to my cousins house and will have him forward it to me. This really sucks because now I have to pay Michigan tax and probably over $100.00 for shipping. 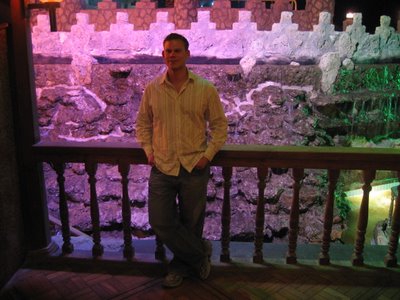 Me, outside of al Boom for a business function.

Al Boom is a replica of a 17th century wooden ship at the Radisson SAS, the interior has been turned into a resaurant. 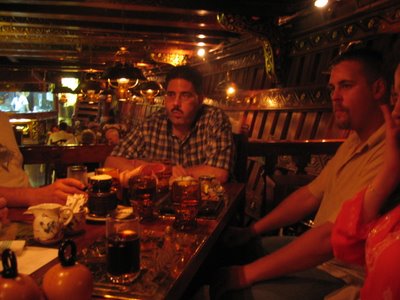 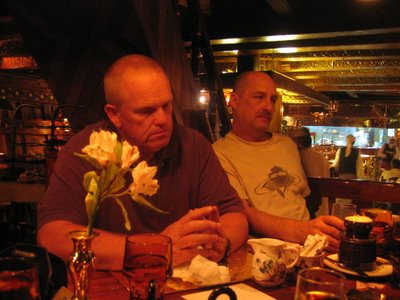 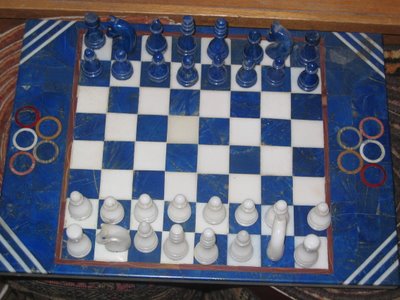 I bought this Lapiz Chess Set a couple of months ago. It was about $85. 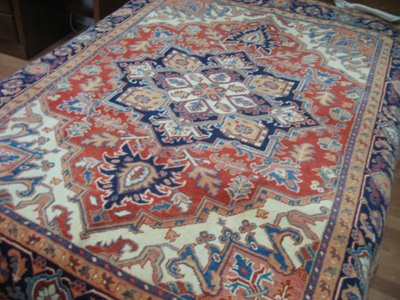 I bought this wool carpet for my parents for the Mother's Day/Birthday/Father's Day Season. It's from Hariz, Iran.

Story by Alan Zarembo of the LA Times.

There Were No WMD In Iraq

Some people are taking a closer look at WMD in Iraq.

I think that's a good idea, but hyping the idea that there were WMD in Iraq is really dumb. I have a feeling that the way some are spinning the reports of WMD in Iraq are setting us all up to look bad (not intentionally, of course).

Playing-up the old chem weapons scattered around as vast supplies of WMD is really dumb, and will take away from the more important themes that we should draw-on.

It would make much more sense to use the reports to provide proper perspective; reminding people that when they say "No WDM were found in Iraq", they mean it figuratively, not literally. They just didn't have large, fresh stocks and weren't actively producing WMD. They were doing research and could set-up production and testing in weeks (not days, as the brits believed).

I'm mostly impressed that this post generated so many comments.

Bitter got me screwing around on blogthings. Errr!

Extroversion:
You have low extroversion.
You are quiet and reserved in most social situations.
A low key, laid back lifestyle is important to you.
You tend to bond slowly, over time, with one or two people.

Conscientiousness:
You have medium conscientiousness.
You're generally good at balancing work and play.
When you need to buckle down, you can usually get tasks done.
But you've been known to goof off when you know you can get away with it.

Agreeableness:
You have medium agreeableness.
You're generally a friendly and trusting person.
But you also have a healthy dose of cynicism.
You get along well with others, as long as they play fair.

Neuroticism:
You have medium neuroticism.
You're generally cool and collected, but sometimes you do panic.
Little worries or problems can consume you, draining your energy.
Your life is pretty smooth, but there's a few emotional bumps you'd like to get rid of.
Openness to experience:
Your openness to new experiences is high.
In life, you tend to be an early adopter of all new things and ideas.
You'll try almost anything interesting, and you're constantly pushing your own limits.
A great connoisseir of art and beauty, you can find the positive side of almost anything.
The Five Factor Personality Test

Memory is failing me, I'll update and provide links after I visit the rental again.

What I'm Listening To

Too much chick music, that can't be healthy.

Right now I'm reading: A Scanner Darkly, The World's Banker, Fooled by Randomness, When Genius Failed (unfortunately I lost my copy, so 'til I find another....), Crisis of Abundance, The Prince.

Here's what I've recently read or listened to: Blink, Undercover Economist, System of the World, The Fountainhead, Snow Crash, Freakonomics, The Diamond Age, The Game, Army of Davids, Shop Girl.

When I have the time sometime, I will look at fuel consumption curves and try to create some traffic models. I should be able to figureout what level of buy-in is needed to get my fuel saving driving to work and how much fuel and time would be saved.

[Update:Climate Change Connection cites a researcher who says it's best to use 2/3 of available power!. I actually was aware of this link long, long ago but neglected to post it.]